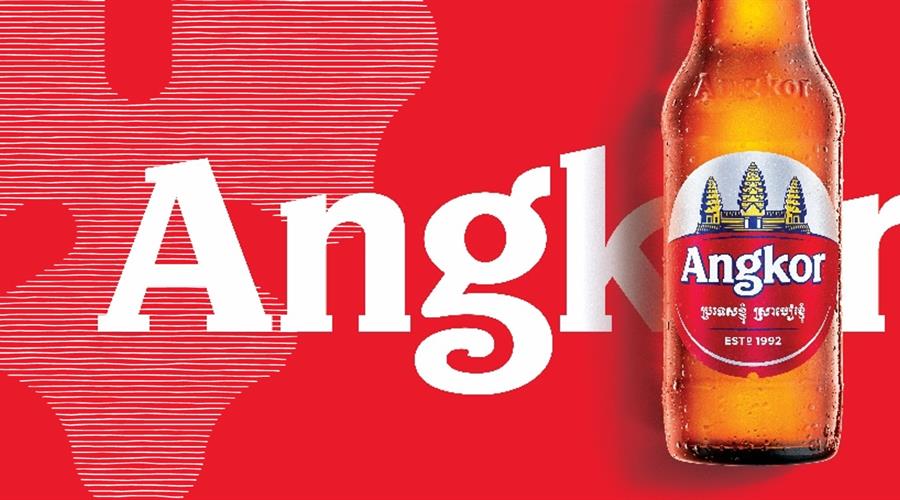 After the successful relaunch over this past weekend – in great style and with a splash - of Angkor Premium Beer to around 30 media outlets and 2,500 representatives from our customers and distributors, Michael Norgaard Jensen, MD of Cambrew, is now leading his team out in the field across Cambodia to make sure that the new Angkor Beer rushes to the hands of the Cambodian consumers, who have been thirsting for a superior quality beer with a more modern and trendier look: which is exactly what the new Angkor Beer has to offer.

​​Please click on the above to view part of an opening show that unveiled the new Angkor Beer in great style.

In August 2018, Carlsberg Group increased its ownership in Cambrew, one of Cambodia’s largest brewers, and took over the management control of the company. Since then, the ‘relaunch’ of an upgraded Angkor Beer has been on the very top of Michael’s agenda. Now, a year’s meticulous preparation is reaching its climax, marking a key milestone in Carlsberg Cambodia’s transformation journey and Angkor Beer’s betterment journey. During this process, many colleagues around the Carlsberg globe have been contributing to the first success of the relaunch. 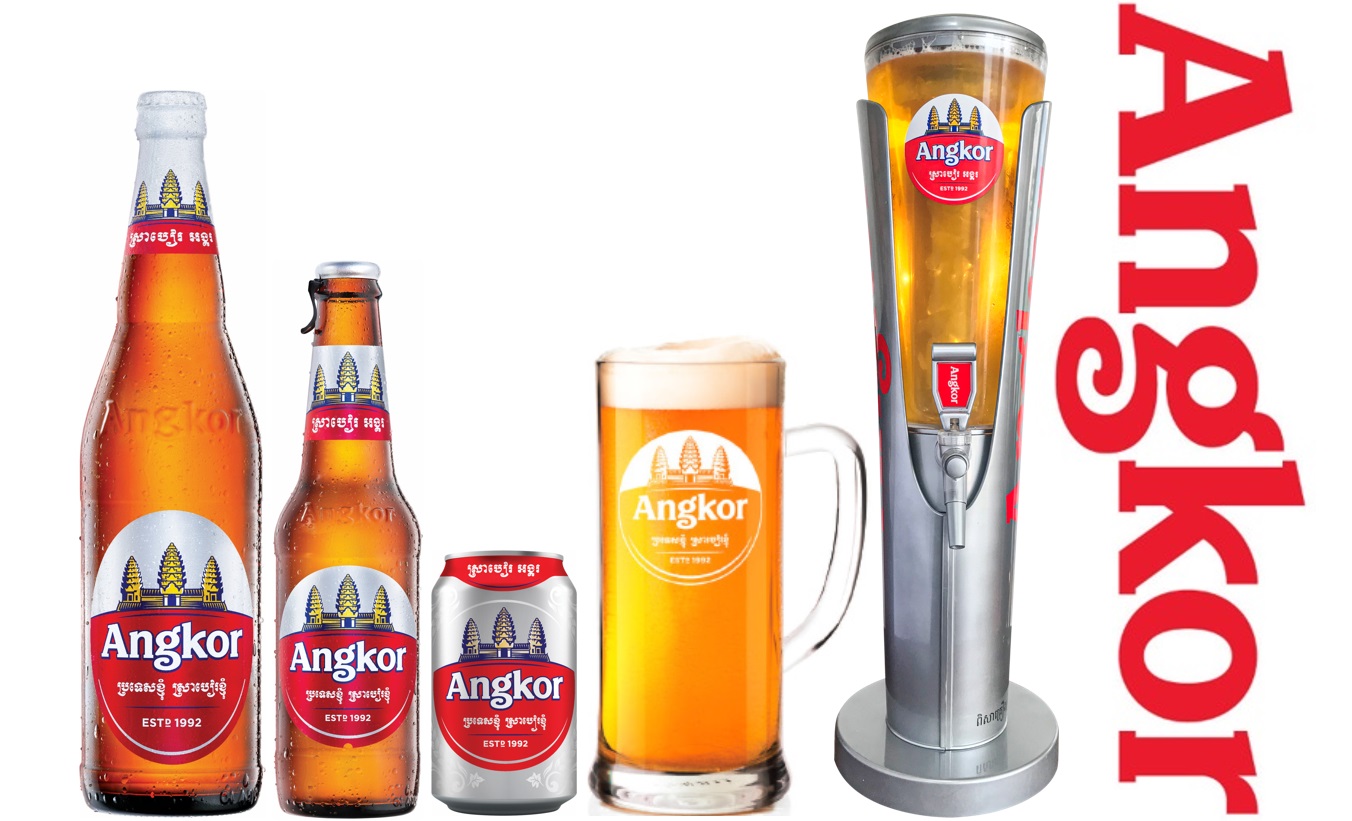 Angkor Beer was first brewed in 1992 and has since received multiple laurels in international competitions, including a recent Gold Award from the prestigious Monde Selection. As competition is getting fiercer in Cambodia, the brand was in great need of a major upgrade, as indicated by numerous in-depth consumer studies.
After the unveiling of its new look and feel, including a series of packaging improvements, on top of a fine-tuned liquid that both stays true to its original Khmer taste and lives up to the more demanding Cambodian consumers, in the coming weeks and months, the new Angkor Beer - in 330ml and 640ml bottles and 330ml cans as well as on taps - is expected to be available in all our outlets across the country. Consumers will also have chances to immerse themselves in some unique brand experiences in the outlets and on online platforms, and, win lavish cash prizes to double their drinking fun.
​
​“The new, best-in-class look of Angkor Beer, the best in its own history indeed, is a testament to our constant pursuit of brewing better beer and to our unwavering passion to innovate and give consumers new, exciting experiences.” Michael hails the new Angkor Beer as part of Cambrew’s bold effort to solidify the brand’s reputation as being vibrant and innovative. 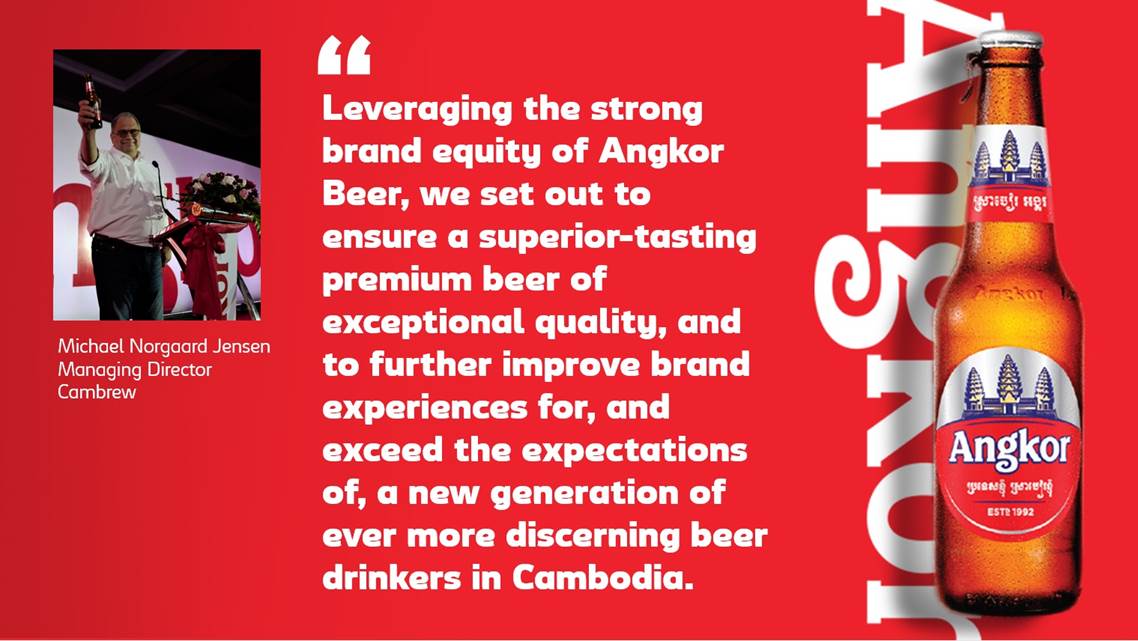 Cambrew “took inspirations from the brand’s glorious past, and has looked at all aspects of the brand: its products, packaging and behavior”, according to Michael. “We can now say that it is what we must demand of ourselves.”
The new distinctive packaging, highlighting the image of the world renowned Angkor Wat, is more modern and trendy-looking. It emphasizes the brand’s proud cultural connection with the rich Khmer heritage, thus helping to stoke an immediate sense of national pride. The white lettering of ‘Angkor’, ‘1992’ and ‘Premium’ highlights the brand name, reinforces its long history as well as the beer’s premiumness and great craftsmanship.
To make the Angkor Beer brand story come alive in every touchpoint, as the brand embarks on a ‘betterment’ journey, a stepped-up ‘My Country, My Beer’ marketing campaign and a series of better and more lucrative consumer promotions will be launched to help captivate its consumers. 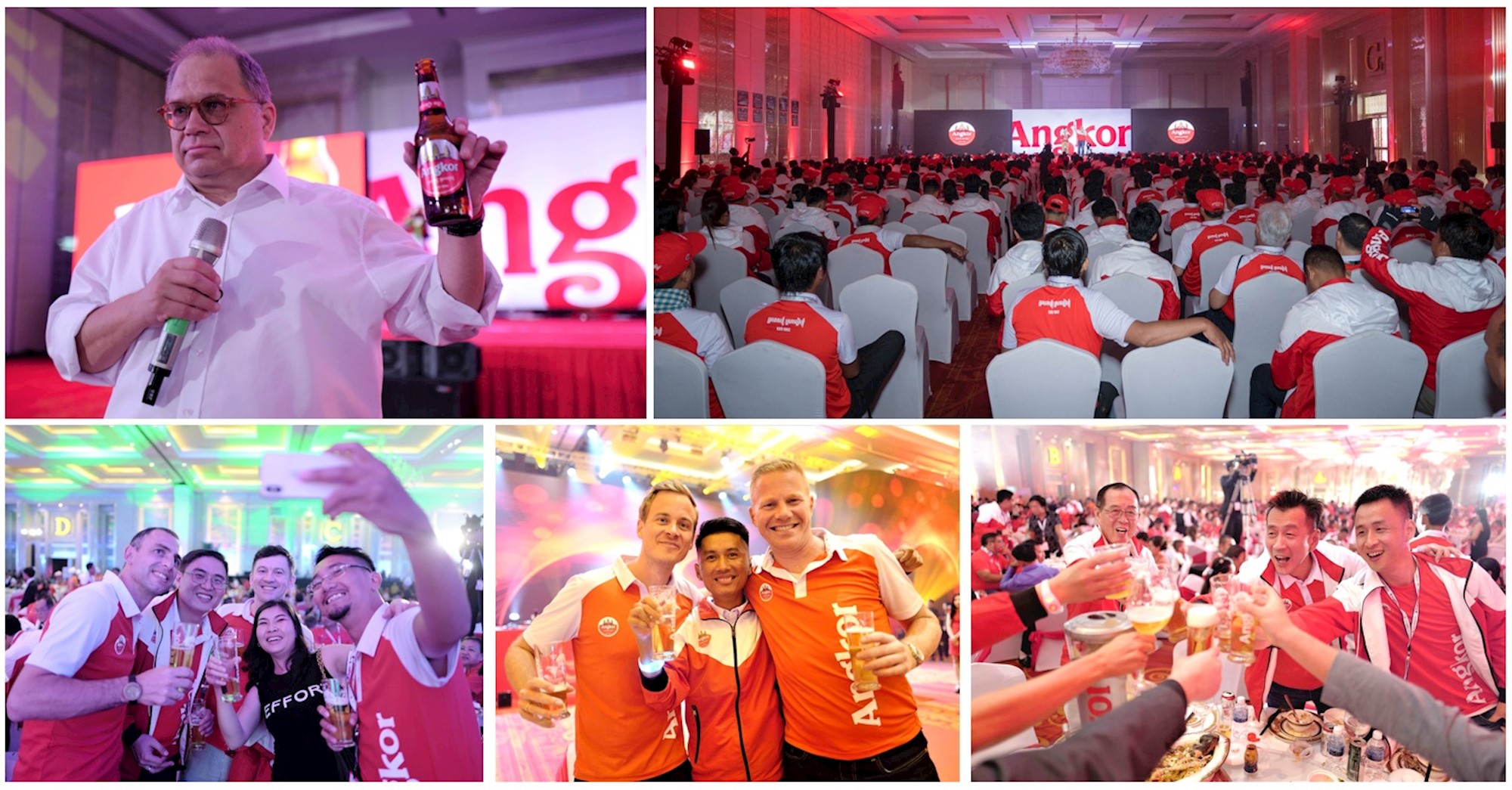 ​Using a series of engaging events, the Cambrew leadership team issued a rallying call to our local employees, customers and distributers to fight the must-win-battles in the market.​

Angkor Beer has always been part of Cambodian consumers’ pride in their Khmer culture and values. Now it also taps into the vision of our founder, J.C. Jacobsen, who was passionate about brewing the highest-quality and best-tasting beer, as well as into Carlsberg’s more than 170 years’ brewing excellence. “This effort would make our founder proud if he could see that we are pursuing the same spirit of ‘betterment’ to breath a whole new life into Angkor Beer, an important local brand under Carlsberg Group,” Matteo Fantacchiotti, Asia Commercial VP, commented.
“The upgrading of our Angkor Beer is part of our aggressive efforts in accelerating our growth through premiumisation in Asia. In addition to continuing to grow a wide range of our international premium brands, we are also bettering our product offerings and enhancing a premium portfolio - building on the tremendous strength of our local power brands, with Angkor Beer being among our top strategic priorities in this effort,” Matteo continued.
You are invited to view the new Angkor Beer TV commercial, which highlights the premiumness of the brand and conveys the rich cultural nuances associated with one of the most beloved beer brands in Cambodia.​
In accordance with the latest European standards and technology, the new Angkor Beer is locally brewed from Cambodia’s most experienced, and Southeast Asia’s largest, brewery, which is located in Sihanoukville. “I would like to thank all our colleagues who have been involved in this relaunch effort, especially our team here at Cambrew, whose heroic efforts have culminated in a superior-tasting premium beer of exceptional quality, which is perfect for today’s Cambodian consumers, who constantly look for better beer and better drinking experiences.” 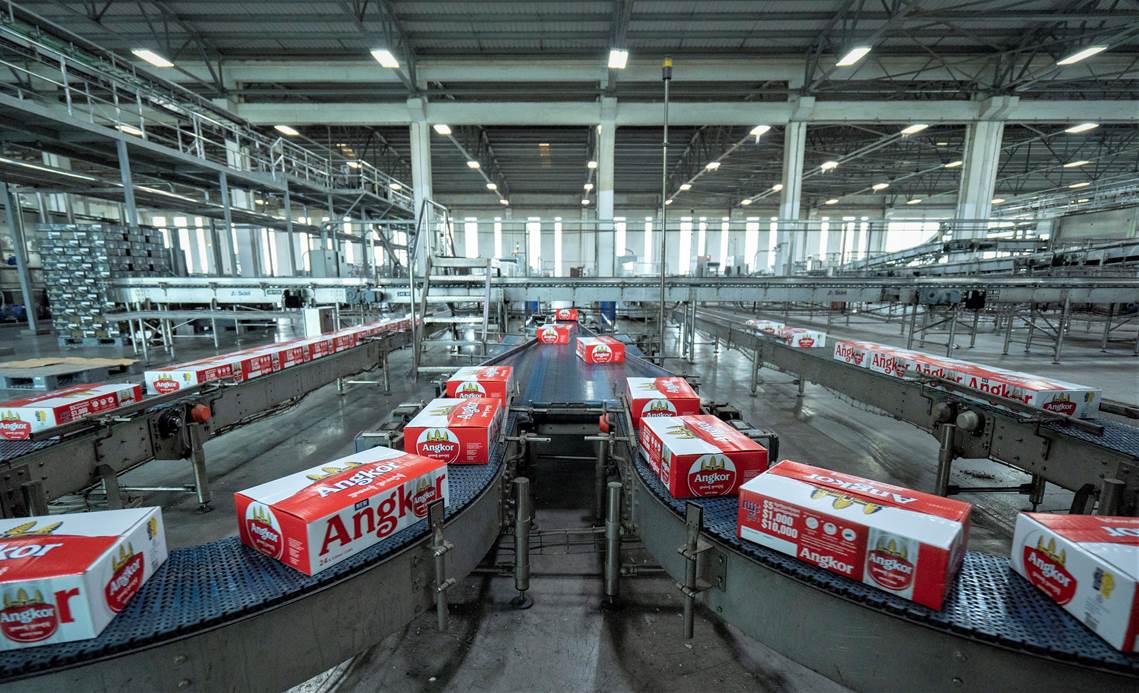 ​​Our brewery in Sihanoukville is Southeast Asia’s largest brewery with a designed production capacity of 12 million hectoliters.​
“We will ensure that the relaunch is a success, which, in turn, will help reassert Angkor Beer’s place as a pioneer of premium brewing in Cambodia, and help reclaim Cambrew’s rightful position as the leading brewer in the country,” Michael said. 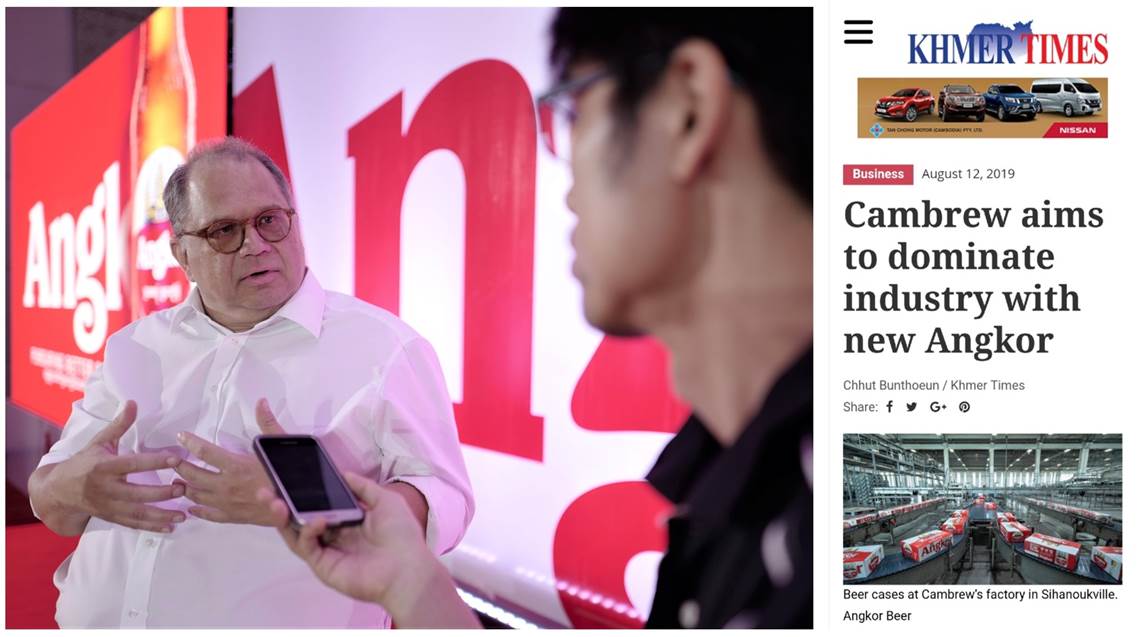 After Michael spoke passionately about the new Angkor Beer to the media, major media outlets have started to run stories about the brand’s exciting milestone.

IMPACT IS ON ITS WAY! 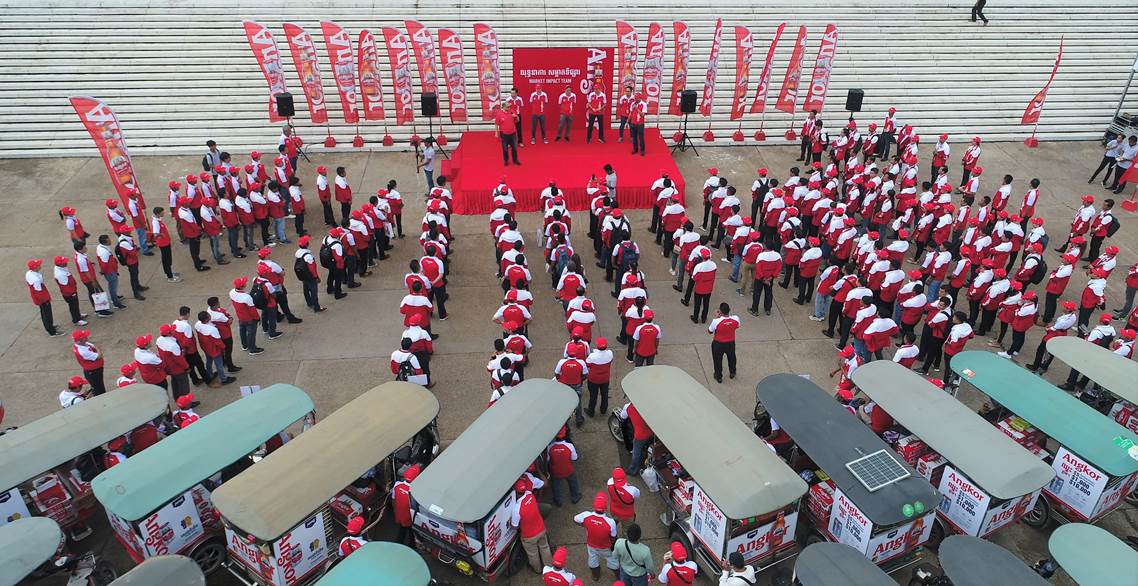 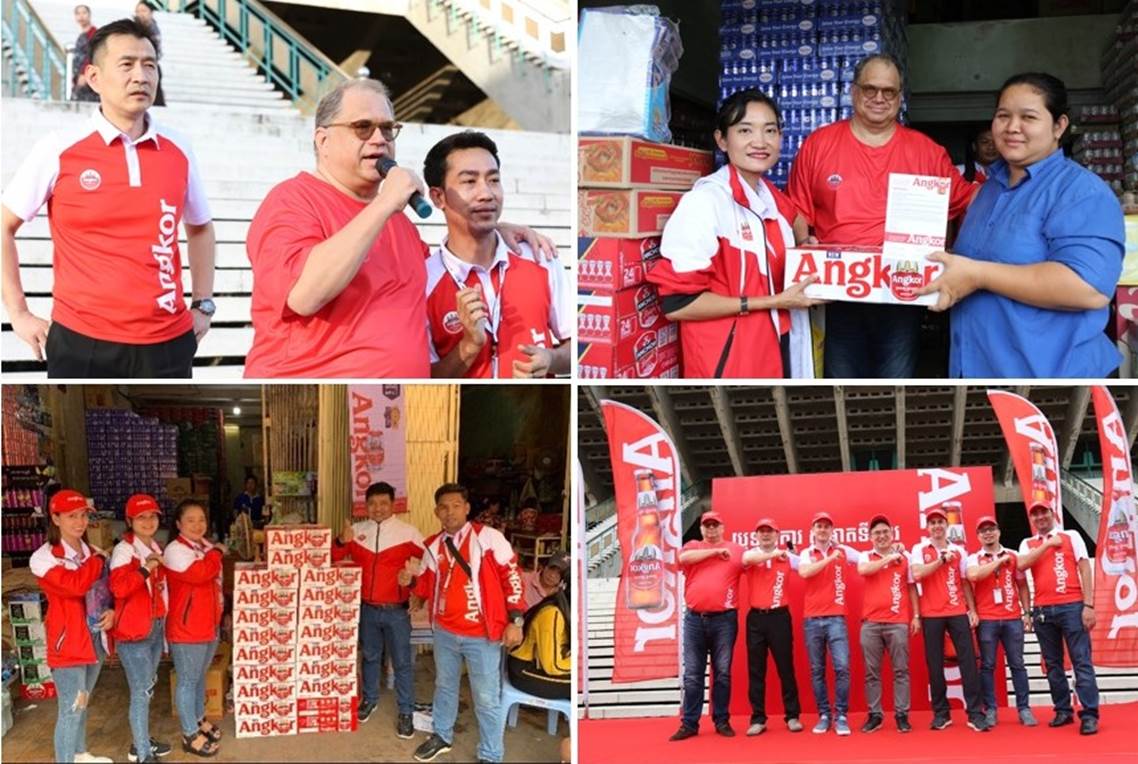 Aside from an impressive fleet of Tuk-tuks that are going out in force to service our customers, a prominently branded Park & Party ‘Carnivan’ is also touring major Cambodian cities to provide fun experiences to our target c​onsumers.​