The Red Barley Campaign From Around the World !

Asian markets are always relentless in leveraging great brand assets from Group Commercial to build brand equity in the region. Here we've rounded up the following snapshot, as a case study, to show you how we go bigger where there's a big idea…

Carlsberg turns all red in Asia with the Red Barley campaign 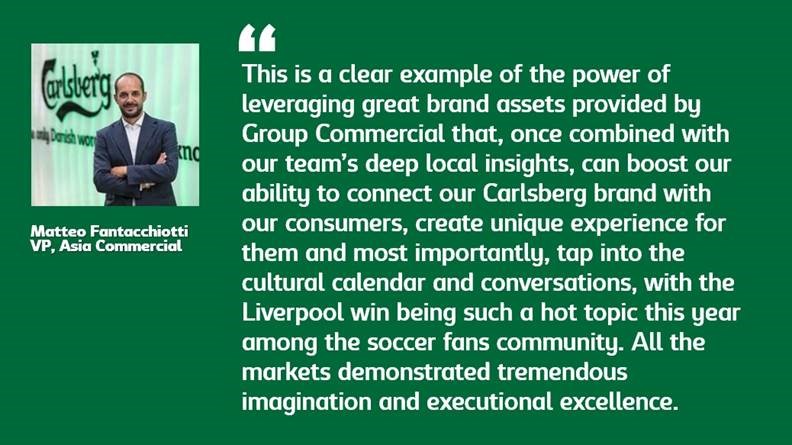 "I'm extremely happy to see that many of our markets in Asia have run a successful Red Barley campaign." Matteo Fantacchiotti, VP, Asia Commercial, commented on the results: "We have further important Group-wide initiatives coming up and I look forward to even bolder efforts, stronger commercialization of our assets and brilliant results." 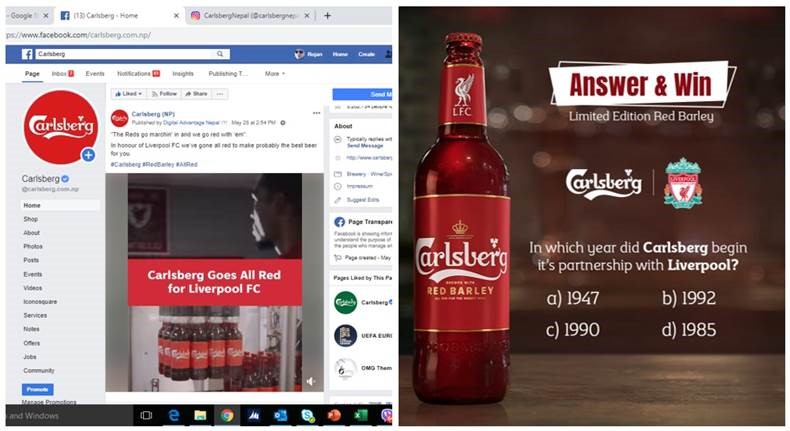 In Nepal, the team fully utilized the Red Barley hero film to build awareness among our consumers of the legendary partnership between Carlsberg and Liverpool FC on digital platforms, especially Facebook and Instagram, garnering more than 6 million reaches and more than 19 million impressions! This was followed by an 'Answer and Win' quiz contest on the platforms to create engagement with target audience, out of which 30 lucky winners were awarded with a limited-edition Red Barley bottle. 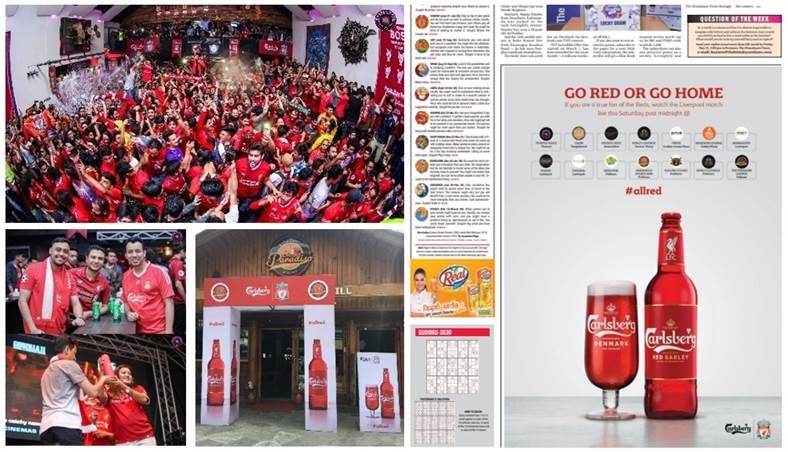 The team staged football viewing sessions in 14 outlets in Kathmandu and Pokhara (both prime markets for Carlsberg in Nepal), supported by digital and print advertisements. Football fans were offered a chance - with purchase of Carlsberg products – to win a Carlsberg Red Barley bottle, creating a memorable moment for the 60 winners, as well as a great brand experience for thousands and thousands of bar-goers that participated in the lucky draws. 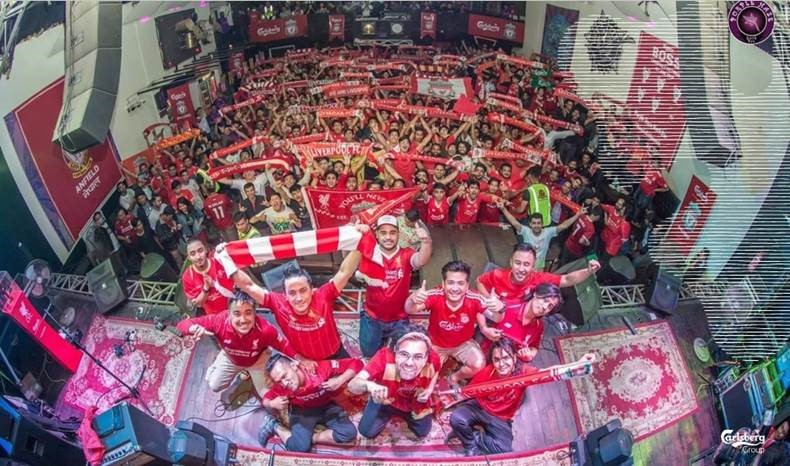 The Red Barley campaign, a major defining moment for the LFC fans around Nepal, was able to generate a major traction among Carlsberg consumers in the market.

In Vietnam, top-tier mainstream media such as Dan Tri, The Thao Van Hoa, and Thanh Nien, carried articles telling the legendary story of how Carlsberg Red Barley was born in honor of our long-standing partnership with Liverpool FC. The team also organized a digital activation with "The League of Red" challenge on Carlsberg's Facebook page, encouraging football fans to "go all red" with Carlsberg, which cultivated 20 million reaches and more than 30 million impressions within just 2 weeks of execution.

To even further amplify the message in the media, the team organized a special media trip for two influential journalists to taste our great Red Barley beer while watching the amazing finale in Anfield. To help create story angles and an unforgettable experience for the journalists, the team went as far as arranging for them to meet with Liverpool legends and a friendly 'match' between them and the Liverpool FC's coaches on the Anfield field. As a result of these efforts, the journalists shared 18 social media posts as well as reports in their respective media outlets, which created substantial PR values. In addition, the team reached out to several high-profile Vietnamese football players, who in turn shared their own posts about the campaign. Combined, these influencers captured a whopping total of 90,000 reactions, more than 13,000 comments and more than 1,000 shares.

In China, social media platforms, owned or paid, featured the limited edition Red Barley products and the stories behind them. They partnered with popular platforms like Hupu to build brand engagement and amplify reach. Famous 'internet celebrities' were enlisted to help further build up hype, and their posts stoked passionate discussion around the topic. The campaign achieved more than 5 million impressions on the Internet.

Our team in Hong Kong, aside from running PR stories and advertisements in print and on social media (our Carlsberg Facebook page as well as third-party pages), also enlisted KOLs to help capture the imaginations of our consumers. They arranged football viewing parties in select outlets, as well as brand display in other outlets which ran promotional offers. 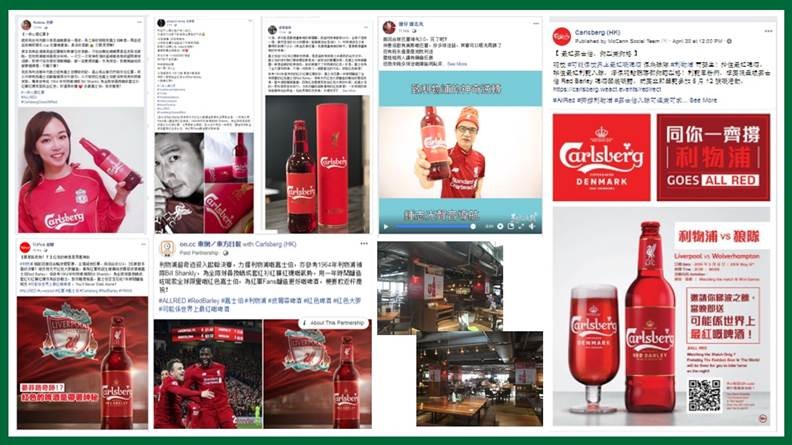 With very limited amount of Red Barley bottles available for Malaysia, our team in the country made sure to give fans from all over Malaysia an equal chance to win one of these exclusive bottles. They ran a social media contest with a local influencer. They also engaged Carlsberg outlets who played host to viewing parties across the Klang Valley, giving eager fans a chance to bring a Carlsberg Red Barley home simply by predicting the score and winning via a lucky draw at the end of the match. Face painting, football juggling, quizzes… the variety of tests to reward true fans continued all the way past midnight at these participating outlets. 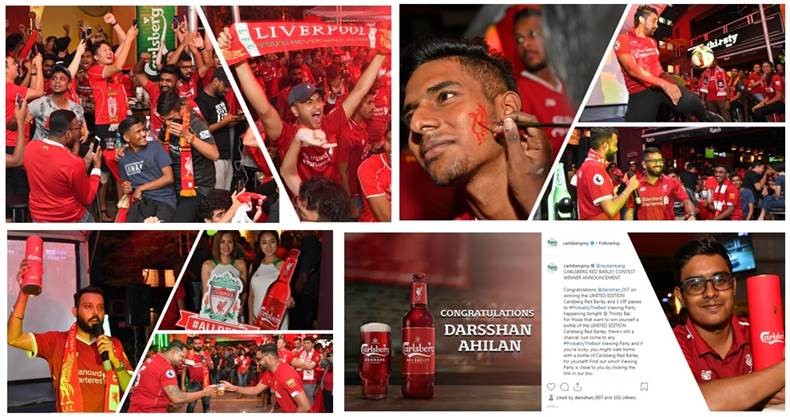 The demand for the limited-edition Red Barley Carlsberg beer has been unlimited!  The Red Barley campaign has proved to be a major support to the brand equity of Carlsberg with our consumers getting a unique experience beyond just football.